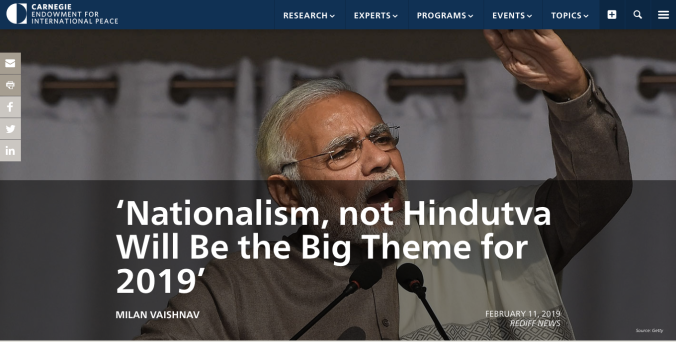 I recently did an interview with Archana Masih of Rediff on the state of the 2019 campaign. We touched on everything from nationalism in India to the Budget and the health of India’s institutions.

Can a united Opposition give a good fight and turn the tables? Or is the BJP now a well oiled election-winning machine, despite the setbacks in the assembly elections?

The united Opposition can definitely give the BJP a good fight. But I start from the premise that this remains the BJP’s election to lose.

It possesses a lot of advantages. Modi remains the most popular politician in India; the BJP’s organisational and fundraising prowess is considerable; and the Opposition, while newly collaborative, has no leader or clear economic messaging as of yet.

There are many people confidently predicting that Modi will be a one-term prime minister; I think that is very premature.

The national campaign has not yet begun in earnest and he has every incentive to presidentialise this election, as he did in 2014. One thing we know is that campaigns do have an independent, causal, impact on people’s voting decisions in India.

You can read the entire interview here.