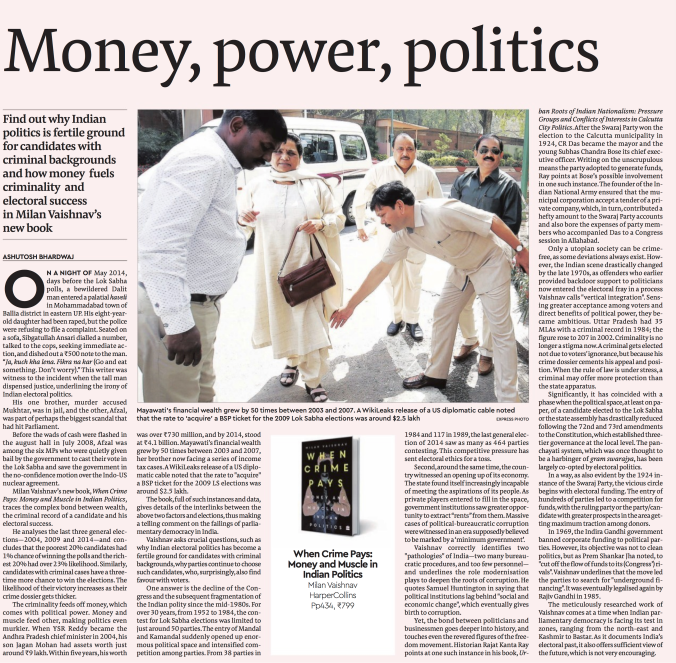 Ashutosh Bhardwaj has a nice review of When Crime Pays in today’s Financial Express. He begins with this anecdote about Sibgatullah Ansari, brother of noted don-politician Mukhtar Ansari, currently an MLA in Uttar Pradesh:

On a night of May 2014, days before the Lok Sabha polls, a bewildered Dalit man entered a palatial haveli in Mohammadabad town of Ballia district in eastern UP. His eight-year-old daughter had been raped, but the police were refusing to file a complaint. Seated on a sofa, Sibgatullah Ansari dialled a number, talked to the cops, seeking immediate action, and dished out a `500 note to the man. “Ja, kuch kha lena. Fikra na kar (Go and eat something. Don’t worry).” This writer was witness to the incident when the tall man dispensed justice, underlining the irony of Indian electoral politics.

The entire review is worth reading as Bhardwaj touches upon some of the (oft-forgotten) historical roots of the criminal-politician nexus. You can read the full review here.

I am really pleased to have the chance to sit down with Adam Roberts of the Economist on May 3 at Carnegie. Adam, formerly the paper’s South Asia correspondent, and I will be discussing his new book: Superfast Primetime Ultimate Nation: The Relentless Invention of Modern India.

There will be a reception and book signing to follow. All are welcome. To RSVP, click here.

Manik Sharma has written a review of the book for FirstPost. I also had the chance to speak with Manik about some of the book’s main themes.

Though there are clear signs as to where the Indian system ails, there are no clear signs of it being treated. Criminality has simply become too entrenched. And therefore it takes a book like When Crime Pays, and a hovering gaze to make sense, and question with renewed intensity, the state of our country’s politics. When Crime Pays is perhaps even more important for those who wish to ignore it, than those who will readily devour its uneasy findings.

It was really gratifying to see this list this morning courtesy of my publisher, HarperCollins India. If you’ve had a chance to read the book, THANK YOU.

And now for a request: please leave a review of the book on Amazon. Whether you loved it, hated it, or were indifferent, it would be great to hear from you.

When I was in Bombay in February, I recorded a podcast with funny-man Cyrus Broacha for his “Cyrus Says” podcast. The recording was a hoot although, as you can tell by listening, I struggled to keep up from the moment we started recording.

Cyrus and I talked about my childhood, my book, the city of Delhi, Donald Trump, Narendra Modi, and everything in between.

The podcast is out now and you can listen to it here.

That’s the title of a recent review of When Crime Pays by Atul K. Thakur in the Kathmandu Post. Thakur calls it “a book that is extraordinary and purposeful—which despite being centred on Indian politics is universal in its application.”

But the author also raises a few quibbles with the book that are valid and useful. The first is that the book does not delve into “the misuse of media or of public relations during elections.” Thakur writes:

Never in the history of parliamentary democracy has conventional and new media been misappropriated as it is now. In a world ruled by opportunists, truth continues to be distorted beyond recognition, influencing voters with an avalanche of non-issues instead.

Thakur’s second critique is about the very nature of criminality:

[T]he definition of “crime” in itself needs to be revisited, as modern-day crime is so well-organised and thoroughly proofed that merely classifying it as “money and muscle” only paints half the picture

Thakur’s review is well worth reading. You can find it here.

Over at The Wire, Raghunath Nageswaran has a review of “When Crime Pays.” He begins with an excellent quote from the sociologist Max Weber:

“There are two ways of making politics one’s vocation: either one lives ‘for’ politics or one lives ‘off’ politics,” said German sociologist Max Weber in his essay ‘Politics as a Vocation‘. Surely, many politicians have come to live off politics but what are the ‘incentives’ that encourage individuals soaked in criminality to take the plunge into it in the first place? At a time when we are witnessing increasing criminalisation of politics in our democracy, this question needs to be confronted head on and that’s precisely what Milan Vaishnav sets out to do in his book When Crime Pays: Money and Muscle in Indian Politics.

You can read the entire review here.

Vir Sanghvi has a review of When Crime Pays for the Business Standard. Here’s a brief snippet:

Vaishnav argues persuasively that the criminalization of Indian politics has many causes. In rural India parties need organizations. It is easier to co-opt local dadas and their gangs than to build new party organizations. Many of the criminals also have money. Parties are happy letting them finance their own elections and grateful for whatever money they donate to the larger campaign.

But there is also a fundamental failure of Indian democracy. The reality is that as loathsome as these criminals may be, people do vote for them. They continue to win elections. Even if the likes of [Narendra] Modi and Nitish [Kumar] are sincere about ridding politics of criminals, they need the goondas because we, the voters, like them enough to keep voting for them.

You can read the entire review here.